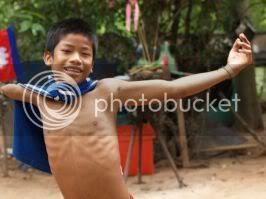 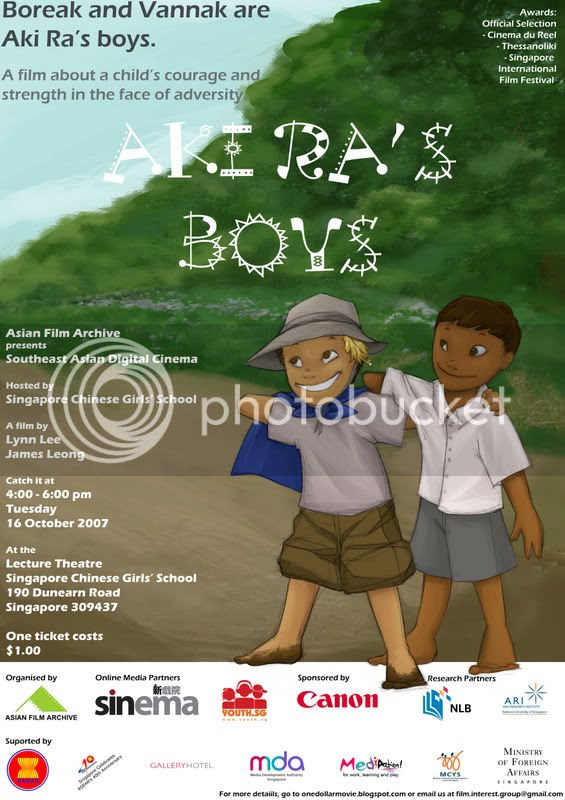 YAY! Our screening of Aki Ra's Boys was a wonderful success and we raised more than $300! This money will be going to the boys themselves!

"I learnt so much about the lives of others who are more unfortunate and I sincerely belive that we should be thankful with our own lot. This film is seriously an eye opener and is a must-see for anyone wanting to gain insight."
-Choo Shimin. 2CO

“I personally thought that the movie was very touching and emotionally moving because it portrays the pain and suffering of two boys. I feel that the movie creates an out-of-the-screen experience for me and I also thought-provoking as it also gives me insight on how children of other countries live their lives which are much less fortunate than our own. I know that I will never experience these horrors, which makes the reality in the movie even scarier. So don’t forget to catch it because it is a once-in-a-lifetime experience!”
- Nandini Jayanthinathan, 2SY

"I think it was really, good and I learnt a lot more about the sufferings and disasters happening right in our region. We are really very fortunate and I hope more people will watch this movie and learn about the hardships we do not have to go through."
- Chiong Si Hui Joyce, 2SY
Updated : Tuesday, September 25, 2007, 3:40 AM
Film Interest Group, SCGS
Weekly exhibits

Look forward to a series of weekly exhibits that will be put up in the canteen starting from the first week of term 4. Also, take part in quizzes based on the exhibits and stand to win good stuff!
Updated : Friday, September 7, 2007, 12:40 AM
Film Interest Group, SCGS
Welcome!


Aki Ra's Boys
Welcome to the movie website for the screening of
Aki Ra's Boys at Singapore Chinese Girls' School.
Here you will find information about the movie, screening details and updates.

Boreak was six when he lost his right arm in a landmine accident. Family members rushed the young Cambodian to a nearby hospital where so-called "doctors" performed a crude amputation. Burdened with eight other children to feed and unable to cope with the stress of handling a crippled son, Boreak’s parents decided to send him to a home in Siem Reap for young landmine victims.

Despite his tragedy, Boreak is ever optimistic and refreshingly lacking in self-pity. Like most children, he is mischievous and inquisitive. He wants to be a wrestler, a rap artist, a football player. And he rarely acts as if his disability is a hindrance.

This film looks at the world through Boreak’s eyes, and through the eyes of his good friend, Vannak. It is a world at once bleak and brimming with possibilities.

Our camera follows the boys as they explore a rapidly changing Cambodia. And we travel with Boreak from Siem Reap to his hometown near the border with Thailand - an area still studded with millions of landmines; a place where impoverished villagers have little choice but to cultivate the very land that might one day claim their lives.

What is it like to live so close to danger? To know that one wrong step could mean a missing limb, or worse, death? To have to worry whenever your children run out to play?

Through Boreak, we also meet Aki Ra, a former child soldier, trained by the Khmer Rouge army to lay landmines. Now in his 30s, Aki Ra is haunted by his violent past and hopes to make amends by giving children like Boreak a home, and by helping remove the millions of landmines still buried in his country.

A journey into the minefields shows us just how treacherous Aki Ra’s job is. On this trip, he removes two mines. But there are many more waiting to be found. Waiting to wreak havoc.

Ultimately though, the film is a celebration of a child's tenacity and indomitable will to overcome the odds. Boreak may be a victim, but he doesn’t behave like one. His zest for life is infectious, his ability to laugh, a testament to the courage and strength children can have in the face of adversity.

Over a ten-week period from August, five acclaimed filmmaking groups from Southeast Asia will be showcased in Singapore as a commemoration of the 40th anniversary of ASEAN. Filmmakers from these digital film groups will be in Singapore as heralds and proponents of the digital film scene in their respective countries.

Each film group will be the focus of a bi-weekly series of events. The programmes to be held in each series comprise screenings, roundtable talks, dialogue sessions and two-day filmmaking workshops by the representatives from the group. These will culminate in a symposium at the end of the year.

Order tickets by clicking here. You will receive a return email informing you on the details.

Link us!
Link your website to us with this button!

The HTML code is as follows:


Discussion Board!
Discuss about the movie or ask questions here!